My second 30 Before 30 Goal was to learn how to make gazpacho.

I’m a big fan and it’s actually way tougher to get right than you’d imagine. There’s a lot more to it than dumping a bunch of green peppers and cucumbers into a chilled bowl of V8.

I figured what better time to learn than on the eve of the 2012 Spain-Italy Euro Cup final. In making this dish (as well as the sangria blanco earlier), I’m hoping to send a little good mojo to the Spanish national team.

Dear God, I hope they destroy Italy. Like, thoroughly embarrass them all over the pitch. I’m talking a five-nil victory that sends the Eye-Ties home in tatters and shame.
Oh, what?
They sent my boys home on penalties – penalties! – and every last one of them acts as if they’re playing for an Oscar as opposed to a cup.

As usual, the most important part of any meal is the music and today’s adventure featured The Gipsy Kings providing the soundtrack.

– 2lbs of tomatoes
– Half a loaf of bread (sidebar: the recipe technically called for day-old bread. Yeah…that’s not a thing in my world. You know what I call day-old bread? Gone. Digested. Dudes, I’m the girl who once split half a loaf of French bread with Biffle while waiting 20 minutes for a pizza. As my boy says, fat kid swag)
– 1 medium cucumber
– 1 small jalapeno
– 1 small ear of corn
– 3 cloves of garlic
– 1 shallot
– Olive oil to taste
– Balsamic vinegar to taste
– Salt and pepper to taste

Can I take a second to talk about tomatoes? You know how some people find peace in looking at a fishtank or staring into a fireplace? Well, I swear I find it in chopping tomatoes in the sunlight. A warm day, a little Spanish guitar, sunshine and the zen of  chopping tomatoes in a quiet kitchen.

Alright, I’m gonna stop being a crazy person now, but seriously – just look how beautiful these are:

Start by slicing up your bread. Once you’ve sliced approximately half the loaf, tear it into small pieces and put in a bowl.

Quarter your tomatoes and dump them into the same bowl. Add salt and pepper and mix thoroughly. Set aside for 20 minutes to soak.

While that’s soaking, roughly chop your cucumber, garlic, shallots and jalapeno. Set aside. 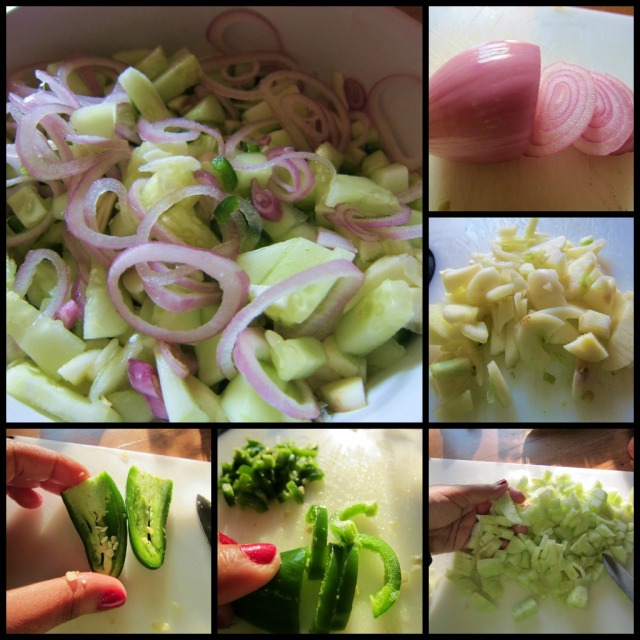 I wanted to garnish my gazpacho with roasted corn and avocado, but unfortunately – the latter was a little unripe.

Shuck an ear of corn and remove all extraneous matter. Then, set the heat to medium and slap that sucker right on your stove. Keep an eye on it and turn every couple of minutes. The whole process shouldn’t take more than ten minutes and you’ll know when it’s done because it’ll be charred and delicious.

While that’s cooking, you can start blending your soup.

Since I have a Not Magic Bullet, I had to make mine in small batches and that whole emulsifying with olive oil bit? Just not happening.

If you have grown-up appliances, please use them.

I blended the now well-soaked tomato-bread mixture together and added the vegetables afterwords coupled with a couple of healthy glugs of extra virgin olive oil and balsamic vinegar. Careful on the latter, it changes the color of the dish in a pretty drastic way if you add too much. Personally, I like the pretty coral hue so I tamped down on the vinegar in a serious way.

Refrigerate immediately. I’ve heard that gazpacho needs up to 12 hours of chilling to firm up the flavors. I’m not certain of the veracity of this, but I do think that soups and stews usually taste better on the second day. So, do with this information what you wish.

Yo, remember that corn you were grilling on the stove? You should check that again. It’s probably done.

Now, if you weren’t blessed with asbestos hands like me, let it cool before you touch it. However, if you possess this utterly useless skill, start removing kernels. 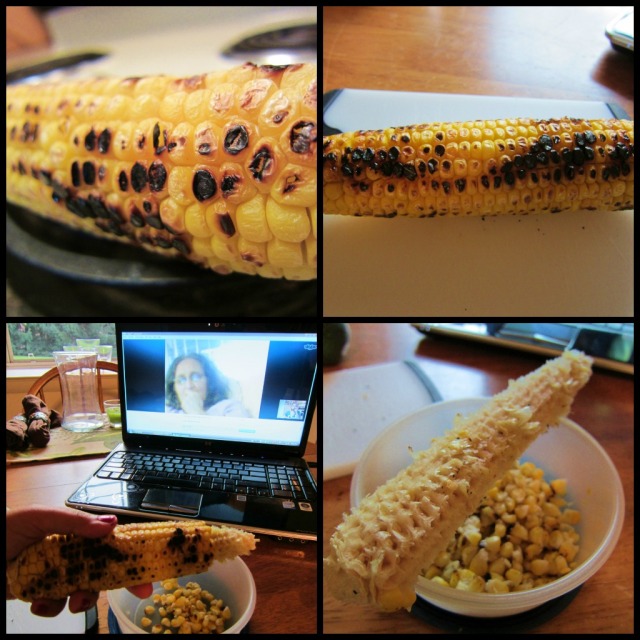 I did this while Skyping with my parents. Paps spent ten minutes criticizing my kernel-removal technique:

Paps: Jemmy! You’re going the wrong way!
Me: There is no wrong way! It’s an ear of corn!
Paps: Why are you being so stubborn?
Me: I learned it from you!
Mom (thinking): Which God did I anger to end up with these two jugheads in my life…?

Then, Mom showed me up my stripping an ear of roasted corn in less than half the time it took me to do mine.

Story of my life – Mom is better than everyone, especially me.

Since I am all about instant gratification, there was no damn way I was waiting until tomorrow to eat this, so I toasted a few slices of bread with olive oil and salt and went to town. 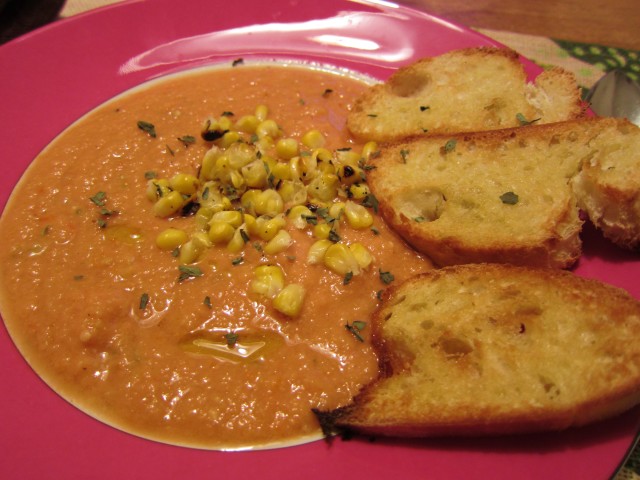 I am proud of this dish. Let’s face it, most of these culinary adventures are just me faffing around the kitchen trying to stave off boredom until the next episode of Justified but I really feel like I made a quality summer meal today. I would gladly serve this to someone I loved.

Final verdict – It tastes like summer. The cucumbers provide a clean brightness, the tomatoes and shallots are sweet and compliment the hit of garlic really well, the jalapeno hits you last – the barest whisper of heat and the corn? Every now and then, you’ll get a really charred piece and the smoky taste just sets the whole thing off.

I usually eat dinner in front of the television, but today – I sat up straight at the dinner table. I ate a really good meal. I looked out of the window at a blue sky while listening to Paco de Lucia and felt at peace with the world.

I hope you make it and if you do, please let me know what you think.

Today was a good day and tomorrow will be an even better one because Italy’s going down hard.

So, Spain annihilated Italy 4-0 and today, I had leftover gazpacho for dinner. With avocado and El Yucateco Chipotle Hot Sauce. And it was glorious.

2 thoughts on “Adventures in Culinary Assembly Or, Gazpacho/30 Before 30: #2 – Make Gazpacho From Scratch”

There was an error retrieving images from Instagram. An attempt will be remade in a few minutes.

Error: Twitter did not respond. Please wait a few minutes and refresh this page.