– Arrive in Tribeca. See Keanu Reeves hanging out on the street, gesticulating wildly while having a very passionate conversation. Wait for some idiot to scream out, “San Dimas High School Football Rules!” No-one does.

– Continue on to Midtown. Check in, realize we’re staying in a shoebox (albeit, a very conveniently located shoebox), grab a bite to eat at Schnipper’s and go wait in line.

– Meet a very nice guy who looks like a cross between Walton Goggins and Pete Dominick who has been waiting in front of the TimesCenter since 10:30 a.m. The show doesn’t start until 8:00 p.m. That’s some serious dedication, folks.

– Get interviewed for Lost community podcast.

Jaime: Seriously? Where?
Dan: Never mind. It’s just a kid holding some pizza boxes.
Jaime (pointing at child on street): That kid? You thought that eight-year-old child was Ron Livingston?
Dan: I’m not wearing my glasses.
Jaime: I hate you.

– Finally get into the building and procure great seats – third row, just left of center.

– Damon Lindelof makes eyes at me.  Seriously — he was looking right at me. You know, kinda like how Insert-Name-of-Awesome-Rock-Star pointed right at you when you were sitting in Row ZZZ? Yeah. Just like that.

– Michael Emerson!!! Ben is on stage right now! Furiously condemn the Times Center’s ‘No Photography’ policy. Don’t they realize that some of us are bloggers?

– Leave the event fully stoked for the finale.

– Try to find decent bar to grab a drink. Get overwhelmed by tourists, so we decide to nip into the BBQ joint across the street from our hotel. Dan orders a Heineken and I order a Tom Collins. The very pretty, very Swedish and very blonde waitress looks at me like I’ve placed my order in conversational Sanskrit. She looks up the recipe in a cocktail rolodex and I am served a gin and soda water. No lemon, no nothing. Look, I realize that drunk businessmen are really eager to hand over their ducats to pretty blonde girls, but come on! I asked for a Tom Collins — it’s a pretty standard cocktail.

– Get back to the hotel and pass out.

– Wake up in the morning feelin’ like P.Diddy and manage to both freeze and scald my flesh while taking a shower. Am I an idiot? No. Apparently, our shower was designed by some sadistic plumber related to Jigsaw.

How the hell does this even work?

– Check into Hotel #2 — a nicer room, a bigger bed, a way less complicated shower and a pretty cool view from the 15th floor.

– Head south to escape the craziness that is Times Square/Midtown. Initially, it’s cool but after a while — the chaos just made my nerves ache. To get to Chelsea, we hit up the subway and I am once again reminded how much I love doing this. I grew up taking the Tube into the city and have decided to start squirreling away money for a trip back to London, this time with Augs in tow.

I am on a continual hunt for the world’s best veggie burger and the New York Burger Company makes a damn fine one. Not only that, but they serve it with sweet potato fries, tzatziki and offer a variety of glorious condiments such as maple djion mustard and curry ketchup (which I would drink by the gallon if it were socially acceptable to do so). Eating this takes me to my happy place.

– Wander around Chelsea, The Village and the Flatiron District until my feet feel like they’re going to fall off and fall madly, completely in love with New York City. Also, realize that all a woman really needs in this world is a summer dress, flip-flops, sunglasses and a big-ass bag.

John Updike once said that a true New Yorker is one with a secret belief that, “people living anywhere else had to be, in some sense, kidding.” And I get that. Because honestly, if you’re living here? Why the hell would you ever want to be anywhere else?

– Encounter more people walking dogs that I ever have in my life. See a Boston Terrier puppy and almost suffer cardiac arrest due to its cuteness. 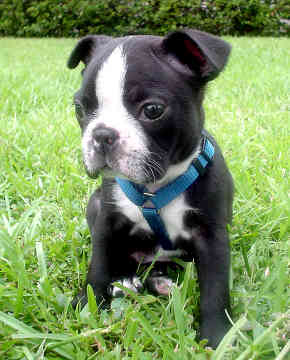 I didn’t get a picture of him, but this is basically what he looked like. Heart-stoppingly adorable.

– Head back to the hotel, collapse, eat burritos from Blockheads (Fail. What kind of asshole thinks cauliflower + burrito + naan bread makes any kind of sense at all?), watch Real Time with Bill Maher and gaze out the window in wide wonder. Holy shit, I love New York.

– Wake up and head to DUMBO for brunch at Bubby’s with friends. Eat a lot, laugh a lot and burn off brunch by walking on the Brooklyn Bridge.

I hate Empire State of Mind by Alicia Keys and Jay-Z. It’s naff, annoying and hardly one of either artist’s best pieces of work. But, after a spending a few days in the city, I kinda get it. I mean, the song still sucks but I get the vibe. New York is an amazing city and I can’t wait until I get a chance to go back.

Augs and I are heading back to NYC in May.

Again, words fail to capture how utterly excited I am about this.

Of course the odds of me actually meeting any of the cast or crew are about the same as Mr. Eko returning to Wild Monkey Island (read: nil), but hey — it’s a once-in-a-lifetime sort of event and a perfect way to kick off Lost Series Finale Weekend.

So, that being the case — I have two questions:

1) Who’s got the best bagels and coffee in Midtown West? This girl needs fuel for the serious line ride into the event and nothing fuels a body better than a buttered bagel and big-ass iced coffee.

2) What does one wear to something like this? I was thinking Dharma jumpsuit and then I realized that:

A) Um no. There is no way in hell I’m donning a Dharma Jumpsuit.
B) Odds of Josh Holloway being seduced by a pint-sized girl in a khaki jumpsuit: Less than zero. We’re talking negative digits the likes of which Daniel Faraday can’t even begin to fathom. Of course, there’s no mention of Holloway even being at the event, but on the off-chance he’s there — I’d really rather he see me and think, “Let’s get married and have ten thousand babies” than mentally scream, “NERD!” and run in the opposite direction.
C) Seriously. No way. I’m all for letting my Geek Flag fly, but dressing up for stuff like this? A line I’m unwilling to cross.